I spent the day at the Dignity Foundation from the 1st to the 5th of June, hoping to meet recipients of their rations programme. It is on the first five days of every month that recipients on this programme come down to collect the same. But it turned out that because of the pouring rains, most of them had sent someone to collect the rations on their behalf. So, I decided to visit them at their houses instead. So I took a list of about 15 recipients; to make my life easier, I picked as many as I could in the vicinity of my office/home.

You could imagine my surprise when I noticed that two of the recipients lived in one of Bombay’s richest areas – Walkeshwar. I was so sure my visit would result in disclosing that the beneficiaries do not meet our poverty criteria (i.e. have a total family income of Rs. 5,000 or less) and we would need to remove the same from our list. I mean, would you think that there would be anyone living in the heart of the diamond-merchant-residences whose total family income was just so little? 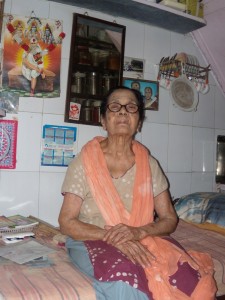 Deviben Vyas at her one-roomed house

So, the first stop was to the house of Mrs. Deviben Vyas. It turned out that the contact person against her records at Dignity Foundation was that of her tailors –  Rameshbhai. Which I only realised when he shouted out to me as I reached outside her house all confused still in search of the same. As I stepped into her house, I was a little taken aback by how cramped her living quarters were. It’s not the most apt anecdote but in the film Munnabhai, just as Circuit walks into the MBBS college room and exclaims that the room ends just as it starts, I walked into the room and realised there was not much more of it!

Under the steps leading to first floor of a short-storeyed-building, a small room has been created a la Harry Potter’s room. One corner fits the cooking stove, the other a small cupboard along with the drinking water filter, the third the edge of her bed with a TV/mandir atop and the fourth was the entrance where I was standing. So cramped was it that her walker, which is usually at an old person’s bedside, needed to be placed just outside the house entrance – forcing her to take support of the walls and take a few steps before she could really use it properly to walk out. Not that she really goes out though – just to the loo or to sit on a chair outside to get some freshair in the evenings.

So, yes, Deviben Vyas’s living conditions aren’t anything one would ask for. But what made a deeper impression on me was how things had gotten to what they were for her. The fact that this could happen to me or just about anybody who’s got things going for themselves today!

A resident of Ahmedabad, Deviben Vyas used to live a very content life – with her 2 brothers and parents before marriage, and her husband and son after marriage. But as life would have it, one tragedy befell another. She slowly lost all of them – her policeman son died many years ago when in service, a brother along with his wife and children in a car accident, and her husband 3 years ago. Till finally, the only person who she had left in the world was one brother. However, there came a point when he too, because of old age, could no longer support her and that’s when he brought her to Mumbai, found this room at Walkeshwar and settled her down there.

For someone who has lived a comfortable life, earning her own bread (as a nurse at Ajinkya hospital, and as a telephone operator at a garment factory prior to that), living on support came as a shock! But she knows that she just cannot do without this support today. From the tailor who collects her rations from Dignity Foundation every month to the neighbours who help keep her room clean as well as help with preparing her daily tea and food. Then there was the doctor who knew her from Ajinkya hospital and operated on her legs for free, after a fall a few years ago. And then ofcourse the anonymous donors from Dignity Foundation who sponsor those rations. 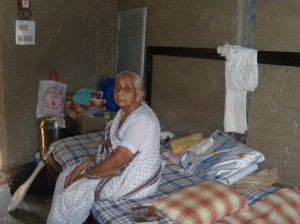 Not very far from Deviben Vyas, I also decided to visit Dahiben Jani – another recipient of the Dignity programme. Walk down the steps of Banganga and that’s when you realise that development has somehow escaped the world that lives at the bottom of these steps. A short walk through the gullis of Banganga and I reached the small dilapidated building of Dahiben Jani. No different from Deviben Vyas, she too was a case of once-comfortable but now in need of support; and gets help from her neighbour, Mrs. Mistry, who runs a parlour next door.

Then there was Ramchandra Kamat and his weak-kneed wife Seeta, who live in the chawls of Hemrajwadi, near Harkisandas Hospital. Ramchandra Kamat was a mill worker at one of the once-flourishing Lower Parel mills till it gave way to a modern day structure and shut down. That’s when he started working as a helper at the Dignity Foundation itself. When he retired, they signed him up for the monthly rations programme. Given that they have no children, not many savings, and would have not expected such a high rate of inflation, they qualify for the rations programme; again, neighbours help them with their daily errands.

While I left all houses thankful that they all ate a decent meal thanks to Dignity Foundation, I couldn’t help but wonder if Dignity weren’t around tomorrow, would humanity prevail with neighbours pitching in to help out more than they did today?

Established in 2000, Give is the largest and most trusted giving platform in India. Our community of 2.6M+ donors have supported 2,800+ nonprofits, impacting 15M+ lives across India.

This site uses Akismet to reduce spam. Learn how your comment data is processed.

ABOUT US
Give exists to alleviate poverty by enabling the world to give. Established in 2000, Give and its partners comprise the largest and most trusted giving platform in India. Give enables individuals and organisations to raise and donate funds conveniently to any cause they care about, with offerings including crowdfunding, corporate giving, cause marketing, and philanthropy consulting. Give’s community of 2.6M+ donors supports 2,800+ verified nonprofits, serves 15M+ people across the country.
FOLLOW US
© Give
MORE STORIES